Axe Cop and the Space Station

Axe Cop is a comic book story written by a 5 year old and illustrated by his 29 year old brother. In episode 1, Axe Cop and Flute Cop team up to fight some dinosaurs and Flute Cop turns into Dinosaur Soldier. Various themes are established from the beginning. They have try outs to get new superhero team members! Getting some blood on you from a bad guy gives you their powers and might turn you bad! You might want to get either unicorn horns, or huge cool weapons, or both! It’s completely psychedelic and great. We sat together and read all of them in a row. Then Moomin came back 10 minutes later with an axe made of Legos. 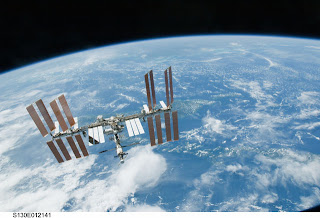 We were amazed at how bright the ISS was, coming out of the southwest at around 50 degrees, probably so bright because of the angle of the setting sun hitting it while the sky around it was pretty dark. We lucked out not to have any clouds, too. As it hit 90 degrees it got fainter and fainter and then disappeared. We looked it up on NASA and on Wikipedia. Moomin then went and transformed the axe cop axe into an International Space Station made of Legos.

I worked a lot while he did homework and ate his chicken nuggets, apple, cheese and crackers, and chocolate milk. I think he also read a Nancy Drew book. Then brushed his teeth, cleaned up, fetched me things while I grumpily ordered him around. I was in a lot of pain yesterday and the day before and basically, only moved from bed to get him food and drive him to school and back. I read him two chapters of Swallows and Amazons, then sang him the verse of the Unicorn Song that I always sing. I end it “and loveliest of all was the unicorn” and then he adds other things that are as lovely. This time he gave a unicorn-blessing to the space station, Dinosaur Soldier, Uni-Avocado-Soldier and Uni-Baby, and Roger from the Swallows book “because the book is really about him.”

Reading with kids: Kidnapped by Robert Louis Stevenson
Advice from a grinch: throw it away!

This entry was posted in Comics and tagged books, comics, space. Bookmark the permalink.

13 Responses to Axe Cop and the Space Station